This list of the best united quotes show that strength comes through unity, no matter how large or small your organization may be.

When the day comes that we live in a world free of racism, bigotry, sexism, and other -isms that divide us, we’ll finally be able to see how powerful we are when united as one.

Until then, we have some inspirational quotes from some of the greatest minds to remind us of what truly unites us and why we must keep fighting until true equality is achieved.

Whether you’re saying them out loud or reading them silently in your head, remember that love trumps hate, equality beats inequality, and strength comes in numbers!

From the simple slogan of United we stand, divided we fall to powerful quotes from presidents and other influential historical figures, you’ll find lots of inspiration for your own journey toward success with these united quotes.

We’re celebrating these 84 of the best United quotes that prove we’re stronger together than apart.

When spiders unite, they can tie down a lion. ―Unknown

No man can lead man, we have to have unity. ―Bob Marley

You can’t have unity without diversity. ―Richard Twiss

Where there is unity there is always victory. ―Publilius Syrus

Ours is a circle of friendships united by ideals. ―Juliette Gordon Low

The peoples of the earth are one family. ―Ruth Benedict

None of us is as smart as all of us. ―Ken Blanchard

Unity without verity is no better than conspiracy. ―John Trapp

In union there is strength. ―Aesop

We all can work; but together we win. ―Unknown

Unity Quotes That Will Inspire You To Work Together

There is no such thing as a self-made man. You will reach your goals only with the help of others. ―George Shinn

There is more power in unity than division. ―Emanuel Cleaver

Not in numbers but in unity that our great strength lies. ―Thomas Paine

I have been aware all the time that my peoples, spread far and wide throughout every continent and ocean in the world, were united to support me in the task to which I have now been dedicated with such solemnity. ―Queen Elizabeth II

In solitude we become aware that we were together before we came together and that life is not a creation of our will but rather an obedient response to the reality of our being united. ―Henri Nouwen

We stand united, facing the big responsibility to change our country into a nation of justice, solidarity, humanity and green development. ―George Papandreou

Our ability to reach unity in diversity will be the beauty and the test of our civilization. ―Mahatma Gandhi

Best Unity Quotes to Bring Us Together

All countries, big or small, strong or weak, are equal members of the United Nations. ―Nong Duc Manh

If the whole of mankind is to be united into one brotherhood, all obstacles must be removed so that men, all over the surface of the globe, should be as children playing in a garden. ―Maria Montessori

There now exists a factor which was formerly lacking – the spirit of the nation has been aroused, and a common misfortune, a common debasement, has united all the inhabitants of the Islands. ―Jose Rizal

The genius of any slave system is found in the dynamics which isolate slaves from each other, obscure the reality of a common condition, and make united rebellion against the oppressor inconceivable. ―Andrea Dworkin

There are whole precincts of voters in this country whose united intelligence does not equal that of one representative American woman. ―Carrie Chapman Catt

So powerful is the light of unity that it can illuminate the whole earth. ―Baha’U’Llah

We must learn to live together as brothers or perish together as fools. ―Martin Luther King, Jr.

To gather with God’s people in united adoration of the Father is as necessary to the Christian life as prayer. ―Martin Luther King, Jr.

Best United Quotes to Help Us Stand Together

I feel like ‘Birds in the Trap’ seem united; it’s just metaphor for ones in their box that are stuck and can’t get their creative idea out. ―Travis Scott

As long as we’re united, and as long as we continue to organize, invest, and lead with our values, we’ll be unstoppable. ―Tom Perez

It’s true that in my family, everyone loves football. So it’s great to have a family that’s united behind you and doesn’t leave you. ―Karim Benzema

Where youth and diffidence are united, it requires uncommon steadiness of reason to resist the attraction of being called the most charming girl in the world. ―Jane Austen

The deepest of level of communication is not communication, but communion. It is wordless…beyond speech…beyond concept. ―Thomas Merton

True enjoyment comes from activity of the mind and exercise of the body; the two are ever united. ―Wilhelm von Humboldt

It seems to never occur to fools that merit and good fortune are closely united. ―Johann Wolfgang von Goethe

We are all different. Yet we are all God’s children. We are all united behind this country and the common cause of freedom, justice, fairness, and equality. That is what unites us. ―Barbara Boxer

Remember upon the conduct of each depend on the fate of all. ―Alexander The Great

It is unnatural for a majority to rule, for a majority can seldom be organized and united for specific action, and a minority can. ―Jean-Jacques Rousseau

There is beauty and power in unity. We must be united in heart and mind. One world, one people. ―Lailah Gifty Akita

When there is no enemy within, the enemies outside cannot hurt you. ―Winston S. Churchill

What we have to do… is to find a way to celebrate our diversity and debate our differences without fracturing our communities. ―Hillary Clinton

To be one, to be united is a great thing. But to respect the right to be different is maybe even greater. ―Bono

If there was one decision I would overrule, it would be ‘Citizens United.’ I think the notion that we have all the democracy that money can buy strays so far from what our democracy is supposed to be. ―Ruth Bader Ginsburg

Unity is strenth… when there is teamwork and collaboration, wonderful things can be achieved. ―Mattie J.T. Stepanek

Nature creates unity even in the parts of a whole. ―Eugene Delacroix

Unity should be the cornerstone of relations. ―Haile Selassie

The Woman’s Party is made up of women of all races, creeds and nationalities who are united on the one program of working to raise the status of women. ―Alice Paul

As I’ve said, there were patriots who supported this war, and patriots who opposed it. And all of us are united in appreciation for our servicemen and women, and our hopes for Iraqis’ future. ―Barack Obama

One can be a brother only in something. Where there is no tie that binds men, men are not united but merely lined up. ―Antoine de Saint-Exupery

We may have different religions, different languages, different colored skin, but we all belong to one human race. ―Kofi Annan

A nation is a society united by a delusion about its ancestry and by common hatred of its neighbours. ―William Inge

All beautiful and noble qualities have been united in me… I shall be the fruit which will leave eternal vitality behind even after its decay. How great must be your joy, therefore, to have given birth to me. ―Egon Schiele

While we celebrate our diversity, what surprises me time and time again as I travel around the constituency is that we are far more united and have far more in common with each other than things that divide us. ―Jo Cox

The laws only can determine the punishment of crimes, and the authority of making penal laws can only reside with the legislator, who represents the whole society united by the social compact. ―Cesare Beccaria

Fantasy, abandoned by reason, produces impossible monsters; united with it, she is the mother of the arts and the origin of marvels. ―Francisco Goya

Unity and simplicity are the two true sources of beauty. ―Johann Joachim Winckelmann

In Sleep we lie all naked and alone, in Sleep we are united at the heart of night and darkness, and we are strange and beautiful asleep; for we are dying the darkness and we know no death. ―Thomas Wolfe

When the rose and the cross are united the alchemical marriage is complete and the drama ends. Then we wake from history and enter eternity. ―Robert Anton Wilson

You can download this Best United Quotes PDF for Free here.

What does it mean to be stronger together?

It means that we are stronger when we stand together as a country and work together to improve it.

How can we live united together?

Unity starts with accepting people for who they are, what they believe in and how they want to express themselves. The way we show people respect is by listening to them and treating them with dignity. As long as we all do these things, then America will stay united no matter what obstacles come our way.

Why is unity important?

Unity is important because without it, there would be nothing but chaos. When we feel alone or discouraged, unity gives us hope for a better future and lets us know that our problems can be overcome.

What’s your favorite quote about unity?

I have too many favorites to choose just one, but one of my favorite quotes is from President Obama, who said we are not as divided as our politics suggests.

In these divided times, where we are constantly bombarded with negative messages of hate and frustration, it’s easy to forget that our country was built on the ideas of unity and strength in numbers.

These powerful United quotes remind us why we’re stronger together as one nation.

What is your favorite quote on Unity?

You can drop us a message by visiting the Contact Us page?

You can visit danijohnson.com to read “How to Create Unity Despite Your Differences?” 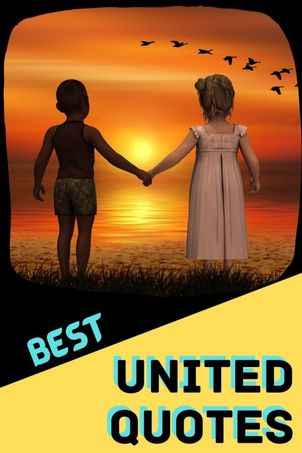