Calligraphy quotes are some of the most beautiful quotes in existence, whether they’re about writing, or about the importance of words.

Calligraphy can be simply defined as the art of beautiful handwriting.

It’s been around for centuries, and people still practice it today for all sorts of reasons, from traditional to artistic to religious and beyond.

As such, it’s no surprise that there are so many famous calligraphy quotes out there that have inspired countless people to write more beautifully and to embrace the beauty inherent in their own handwriting style.

Calligraphy quotes are an excellent way to spark creativity in your writing and add some extra style to your pieces.

Calligraphy has long been held in high esteem as a form of art, but did you know that calligraphy quotes can also inspire your own writing?

These famous quotes from renowned authors and leaders are some of the best calligraphy quotes of all time, and they’ll help you improve both your own writing and your perspective on life itself.

Whether you’re new to calligraphy or looking for some inspiration, these quotes are sure to help you get started on your next calligraphy project. Enjoy!

Calligraphy: the art of excellence.

Calligraphy is a remedy and mental gymnastics.

Calligraphy is the flower of a man′ s soul.

Calligraphy is the art of both ideal writing and an ideal soul.

A letter is a Word′s clothing.

Best Calligraphy Quotes to Inspire You

Kaz’s art is a powerful example of discipline and freedom. His classical calligraphy captures the inner movement and stillness of the brush and mind. ―Joan Halifax

Typography is the craft of endowing human language with a durable visual form, and thus with an independent existence. Its heartwood is calligraphy – the dance, on a tiny stage, of the living, speaking hand – and its roots reach into living soil, though its branches may be hung each year with new machines. So long as the root lives, typography remains a source of true delight, true knowledge, true surprise. ―Robert Bringhurst

I look at lettering as a huge palette which includes calligraphy, type forms, and everything in between. The colors of that palette can be mixed into an infinite variety of blends. ―Julian Waters

The circle is a reminder that each moment is not just the present, but is inclusive of our gratitude to the past and our responsibility to the future. ―Kazuaki Tanahashi

Despite the hard work and frustration, the striving for excellence is part of the fun of lettering. ―Marsha Brady

Calligraphy is the most intimate, private, and spontaneous expressive means. Like a fingerprint or voice it is unique with every person. ―Hermann Zapf

The making of letters in every form is for me the purest and the greatest pleasure, and at many stages of my life it was to me what a song is to the singer, a picture to the painter, a shout to the elated, ore a sign to the oppressed. It was and is for me the most happy and perfect expression of my life. ―Rudolf Koch

Calligraphy is the ultimate synthesis of what I love: language, art and human connection. ―Joy Deneen

On pristine parchment I draw with my skis calligraphic lines of joy, writing poems of movement. ―Patricia Robin Woodruff

Calligraphies are our images, Maestro, images of our faith. ―Mathias Énard

Calligraphy is a kind of music not for the ears, but for the eyes. ―V. Lazursky

The beauty of a letter depends on the harmonious adaptation of each of its parts to every other in a well-proportioned manner so that a whole shall satisfy our aesthetic sense. A result gained only by blending together the fine strokes, stems, and swells in their proper relations. ―Frederick Goudy

Regardless of how diligently a person practices penning the strokes and letters, their efforts will never lead to consistently superb results unless they can see the correct forms in their mind before their pen touches the paper. “The hand cannot conceive what the mind cannot perceive. ―Michael R. Sull

If I had known there was such a thing as Islamic Calligraphy, I would never have started to paint. I have strove to reach the highest levels of artistic mastery, but I found that Islamic Calligraphy was there ages before I was. ―Pablo Picasso

A flourish is to be neat and glamorous and, at the same time, to be filled with motion, life energy, thought, and wit of the master. ―H. Korger

As you work with different teachers, you may note that the truly inspirational and great ones are not dogmatic about letterform, technique or methodology. ―Tina Vickers

In a painting, you can’t make out whether the artist painted the left eye before the right eye. In Chinese calligraphy, you can see the progression of the artist’s stroke. ―Vikram Seth

Figures are the most shocking things in the world. The prettiest little squiggles of black looked at in the right light and yet consider the blow they can give you upon the heart. ―H.G. Wells

What joy there is in hearing yourself think, and to make that thinking into ink. ―John Olsen

Bad calligraphy comes from not understanding tool and form well enough to be free and clear in gesture. Bad calligraphy is making forms that are unsure, insecure, self-conscious, whereas good calligraphy unites the freedom of the hand with the mastery of tool and self in performance, whether letterforms be present or absent. ―Steven Skaggs

Lettering is my music. ―Peter Thornton

A written letter is like a bowl filled with a certain content. The purer the content, the more delicate strings of the human soul it touches. ―L. Pronenko

Calligraphy is the most direct form of all artistic expression. Just as each movement of the dancer is absolute, so every gesture of the calligrapher is essential. It is not the meaning of the character but the writing–the movement of execution and the action itself–that is important. ―Tseng Yu-ho Ecke

Addison spoke in calligraphy while everyone else talked in scribbles. ―Shawn Martin

Just as writing can become calligraphy when it’s creatively, skillfully, and consciously performed, so can all other activities become art. In this case, we are reflecting upon life itself as an artistic statement—the art of living. ―H.E. Davey

Calligraphy may well be simply an artistic version of another form, that is the ideograms which make up the poem, but then not only does it reflect the character and temperament of the artist but . . . also betrays his heart rate, his breathing. ―Dai Sijie, Once on a Moonless Night

More powerful than all poetry, more pervasive than all science, more profound than all philosophy are the letters of the alphabet, twenty-six pillars of strength upon which our culture rests. ―Unknown

Just above our terror, the stars painted this story in perfect silver calligraphy. And our souls, too often abused by ignorance, covered our eyes with mercy. ―Aberjhani

The Best Calligraphy Quotes to Inspire Your Art

Every bottle of ink contains at least one good letter … and it’s at the bottom. ―Peter Thornton

The letter beautiful is an ideal we are engaged in, and it is oftentimes our subject. As we will never be free of this, we must embrace it. ―John Stevens

The advantage of drawing letters is that we can incorporate nuance. Nuance, rather than slavish precision, is what breathes life into our letters. ―Peter Thornton

Each letter in every script known to man holds an eternal power, an individual beauty in its vertical, horizontal, angular lines, in their continuity. ―Achyut Palav

The written letter is something personal, organic, unique and spontaneous. It mirrors the character and the personality of the writer, and often his mood of the moment. ―Emil Ruder

Calligraphy is like crawling into a funnel from the wrong end: the farther you go, the more there is to learn and do. It is a never-ending source of pleasure. ―Sheila Waters

Marks come alive when they are made with a sense of confidence, engagement, an unselfconscious tap into the flow that is somehow beyond yet also within the calligrapher. ―Steven Skaggs

The furthering of calligraphy in our own time above all serves self-realization by developing man’s creative talents. Calligraphy frees emotions and abilities which are hidden in the depths of personality. It activates the power of the soul. ―Karlgeorg Hoefer

Artistic Writing is so attractive and pleasing to the eye that it is never likely to lose its popularity. The skill displayed in its execution creates wonder and holds most people by its fascination. ―F. W. Tamblyn

The Zen way of calligraphy is to write in the most straightforward, simple way as if you were a beginner, not trying to make something skillful or beautiful, but simply writing with full attention as if you were discovering what you were writing for the first time; then your full nature will be in your writing. ―Shunryu Suzuki

You can download this Best Calligraphy Quotes PDF for Free here.

What is the history of calligraphy?

Calligraphy has been around since ancient Greece and Rome where it was mainly used in religious texts. However, even today people still use calligraphy to illustrate religious texts and scriptures. It wasn’t until the 12th century that scribes began to use lettering for non-religious purposes such as creating documents and manuscripts.

What are the different types of calligraphy?

There are many different styles of calligraphy, with the two most popular being Italic and Roman. Italic calligraphy is a type of writing that uses cursive letter forms and pointed pen strokes. Roman calligraphy, on the other hand, is a type of writing that uses broad-edged pen strokes with rounder letters. It’s also worth mentioning that there is a lot of crossover between these two styles as well.

How can you practice calligraphy?

You can find lots of calligraphy resources online – some are more user-friendly than others. You could also invest in books or tutorials to help guide you along your journey. You get plenty of resources for free on YouTube.

Is it easy to learn calligraphy?

Learning any new skill can take time but if you’re willing to put in the effort, then absolutely! Practice really does make perfect when it comes to calligraphy. The beauty of this art form is that its not just limited to your handwriting; it can be used anywhere from social media headers to wedding invitations. With just a little creativity and patience, learning calligraphy will become a rewarding experience for you too!

Who can learn calligraphy?

Anyone can learn calligraphy at any age, regardless of whether or not they have artistic skills! One way to get started is by practicing freehand (without lines) before adding guidelines. Once you’ve gotten the hang of that, adding guides will only serve to improve your work and create cleaner results.

Calligraphy has always been associated with all things beautiful.

And it’s no surprise that some of the world’s most famous quotes have been written in elegant calligraphy script, from Martin Luther King Jr.’s – “I have a dream speech” to William Shakespeare’s – “A rose by any other name would smell as sweet.”

These beautiful calligraphy quotes prove that it really can make all the difference in the world.

What is your favorite calligraphy quote? You can leave your comment by visiting the Contact Us page.

You can also check wikihow for 4 ways to write in calligraphy. 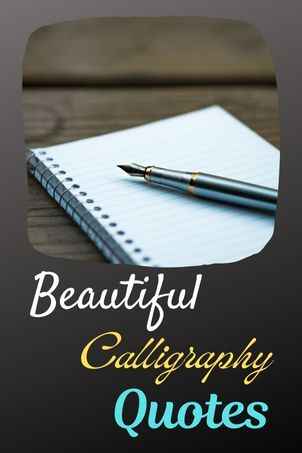